Based on his work as a volunteer advocate in Cornwall, Neil Carpenter describes how six people have had to battle with the Department for Work and Pensions (DWP) whose system, complete with built-in hurdles, is loaded against them.

Two of them, Danny and Thomas, figured prominently in his previous book Austerity’s Victims. The others: Ben, Jon, Tony and Denise are also treated by the DWP in a way which pushes them deep into relative poverty. Relative poverty is defined as when a household has less than 60% of UK median household income, the people in the book being rejected for Personal Independence Payment (PIP) on average are left below 30% of that UK median.
The book not only explores the strain on their finances but also, inevitably, on their mental health. Denise suffers panic attacks and Jon’s mother is reduced to saying: ‘There were times when I was so low that I started to wish that Jon and I weren’t here’.
Benefits on Trial also examines what happens when an appeal is made to an independent tribunal. The injustice at the hands of the DWP is set right, with its decisions overturned by a massive margin either at a tribunal or through an out-of-court settlement. All the people in the book who appeal received no points whatsoever – and, inevitably, no award – when they applied for PIP. At the tribunal stage an average of over 21 points is given and in four cases an enhanced award is made. Tony’s case, with 35 points, is particularly striking.
Thus the DWP stands exposed by the evidence in this book and only one conclusion is possible: the current benefits system, with its distortions and dirty tricks, does not need minor tinkering; instead it needs to be replaced by a system that takes fair assessment as its guiding principle.
NB. As with the author's last book, the aim is not to make a profit on sales but to show how unfairly people with a learning disability are treated by the DWP. The print version is therefore for sale at cost price at £2.83 and the e-book available at 77p. 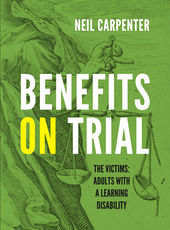